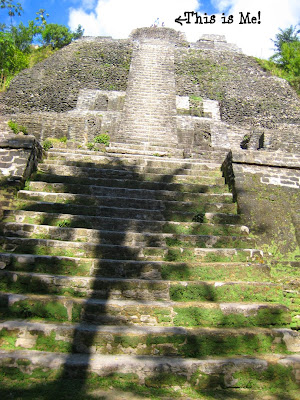 Well, I have been threatening to take a cruise for a long time and finally my sister Cathy called me on it. She did all the booking and arranging of everything so all I had to do is show up with a swim suit and get on the boat!

It was a blast! We took a 7 day Western Caribbean cruise with Holland America out of Tampa that took us to Key West, Belize, Guatemala and Costa Maya.

Belize was by far my favorite. The photo here is of the Mayan Temple called Lamani, It is higher than it looks and only a handful of us ventured up to the top. My brother-in-law Mike and I took the challenge and started our trek. We were advised the climb up is "physical" but the climb down is "psychological". They were right. The climb up, although steep and challenging was just a matter of stopping periodically and catching our breath. (Its higher than it looks.) But the trek down was crazy. I ended up desending the pyramid by sitting down and bumping my butt from one step to the next....like I said, its higher and steeper than it looks!

It was inpsiring to be climbing this structure that was built so many thousands of years ago...very humbling.

Email ThisBlogThis!Share to TwitterShare to FacebookShare to Pinterest
Labels: Vacations

Hi Aunt Suzy.. Thanks for the comment. My boss said she saw you at one of your local shows recently. She just loves your work. Hope you have a great Holiday season!